The number one reason of my trip to Paris was to come and check out the most prestigious culinary school in the world. Le Cordon Bleu. Having earned it’s reputation as the leading culinary institute, Le Cordon Bleu was definitely on the top of my list.

I haven’t even had seen the school yet and I already decided after spending one day in Paris that I could never live in this city. But of course i still went to check out the campus. After a detailed tour and sitting through a class i realized that i just saved myself from what would have been a very expensive mistake.

During the entire 3 hour class we all just sat there and watched the “Chef” cook a 3 course meal.  If i wanted to watch a demonstration i would turn on the food network and watch Martha Stewart make bail. Why should i have to pay thousands of dollars just to watch some goon stand there and cook for 3 hours!? One thing didn’t add up though. The class was thought in French, there was an English interpreter, and half the class was Chinese. Needless to say I was unimpressed with the school and its curriculum. 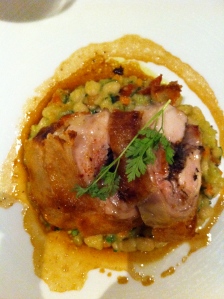 After the disappointment I had with the school and the meal the night before, i was looking forward to make up for it with some good food at a nice restaurant. This time it was the less expensive “Jamin”. I ordered the rabbit as a main course and for dessert i had the chocolate fondant.

The standard of the food was definitely better than what i got the previous night, and it cost literally less than half the price. Some wine, some nice champagne and it was all good. Except for the dessert.

It had absolutely nothing to do with chocolate fondant and the quality of the chocolate reminded me of something out of a Nutella jar. 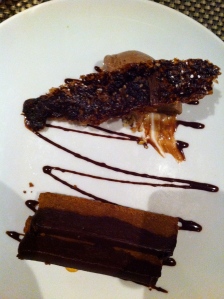 Overall the restaurant was good but nothing special. And the school would have been a complete waste of my time and money. To be honest, I don’t understand the hype people have about Paris. Except for the Eiffel tower, that’s pretty cool.